Alan Schaller on The Photography Lounge 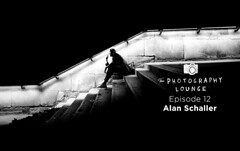 Click here to listen to Alan Schaller on The Photography Lounge.

On this episode of The Photography Lounge, your host Alastair Jolly has a conversation with the wonderful Flickr Pro, Alan Schaller.

Alan is a London based photographer who specializes in black and white street photography. His work is often described as abstract and it incorporates elements of surrealism, geometry, high contrast and the realities and diversities of human life.

He has been featured in publications including The Guardian, The New York Times, The Financial Times, The Washington Post and he regularly has exhibitions in galleries such as Saatchi Gallery, The Leica Galleries in London and throughout the US.

Join Alastair and Alan as they discuss Alan's approach to Street Photography during the Pandemic and find out more about Alan's gear and style. We also get a little insight into the foundation of Street Photography International and what's ahead in the future for Alan.