6 days ago 6
Richie Rich, an impossibly wealthy kid about twelve years old, was a mainstay of Harvey Comics from his first introduction in 1953 until the company folded in 1982.   By the 1970s, he was starring in over fifty titles, far more than all of the other Harvey characters put together, in stories ranging from humor to romance to paranormal mystery to James Bond-style espionage  So many thousands of stories required a huge supporting cast, so Richie quickly got a girlfriend, some boy pals from the wrong side of the tracks, a mischievous cousin, a debutante with a crush on him, and so on.

I never cared much for Richie Rich, preferring the more magical adventures of Casper the Friendly Ghost ,

Spooky the Tuff Little Ghost, and Hot Stuff the Little Devil.  But I did notice two things that happened to Richie during the mid-1970s, when I was in high school.

1. Richie gets a new boy pal, a young comedian named Jackie Jokers, who likes him.  A lot.  Holding hands during the crisis, hugging when the crisis is averted, stammering "If anything were to happen to you....".  In one story, he makes his romantic intentions very clear: "If you weren't always wearing that silly red bowtie, I'd marry you." 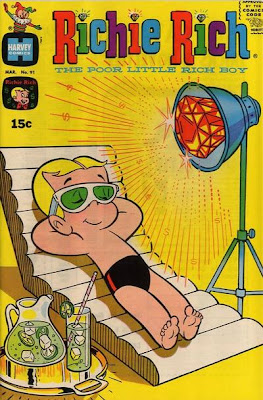 2. Previously Richie had been drawn as a pudgy kid in a Little Lord Fauntleroy outfit.  When depicted in swimsuit or shirtless shots, his body was nondescript:

But, just as the homoromantic subtext began, Richie grew some biceps, pecs, and abs.  He had almost as many preteen muscles as Tommy Norden on Flipper. 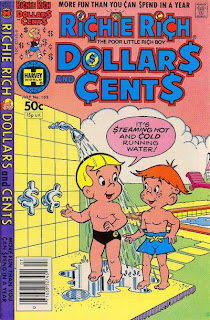 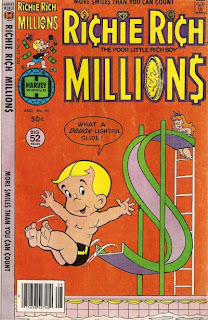 Coincidence?  Or a way to draw the avid interest of pubescent gay boys, some thirty years before Kevin Keller became the first official gay character in kids' comics?